We were late getting a colour TV in our house; I was 11 and remember the first thing that came on was a Saturday afternoon showing of ‘The Wizard of Oz’. The film was made in 1939 and although it starts in dull old black and white, it soon bursts into the exaggerated tones of Technicolor. 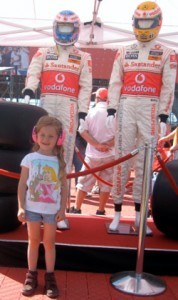 Years later, living in Oxford and happy with a new boyfriend I was introduced to Formula 1 on a portable black & white TV set. It was a test to sit through a race and understand what on earth was going on. When we moved in together and bought our own colour TV, the racing suddenly made sense and it’s a passion we follow to this day, with annual visits to Silverstone which now happily include our children.

Termed by my northern family to have more books than sense in my head, after a degree in English the only work I was half-qualified to do was ‘something in publishing’, and I spent some years in rural Oxfordshire with galley proofs, paper-waxing machines and real old-fashioned typesetters and printers, putting together some lovely educational magazines for O and A level students. I used to order images on the telephone and real prints would be sent in an envelope to be photocopied and laid out for our in-house designer to follow.

I loved that company dearly, not least because the owner used to bring around ice-creams on sunny days, but also because of the people I worked with, both in the office and in university editorial teams across the country. But it was 1995, the desktop publishing revolution had come around, and CDs were being published for children, and it was all happening somewhere else…

Time for another colour moment.

At an interview for a CD publishing job that I didn’t get, I was asked if I ‘knew anything about the internet’. As amazingly I did know the theory, though not the practice, I was offered a job as internet project manager for an educational division of Reed Elsevier, sat in front of a PC and told I couldn’t break it so to go ahead and experiment – and the Internet was mine.

Throughout my working life I have been fortunate to work with a series of inspired and inspirational people, who across countries and continents have found the internet and its potential to be only restricted by their imaginations. I have worked for major companies and with smaller organisations (details on my linkedin profile if you like that sort of thing) but the link has always been the Internet, and how its amazing power can be harnessed for your business.

First we got a dog, then I was pregnant and sure I would be back in my role at T-Mobile after six months and then our beautiful daughter arrived and we were both blown away, turned inside out and upside down and then totally in love with her every moment.

The colours now were pencils and crayons and the inevitable glitter, but the internet became a big part of her life too, often found watching nursery rhymes or playing online games, but since she and her brother arrived I have spent time at home with them and watched them grow. And I followed from a distance even more speed of change as the Internet grows up and grows out too.

So I am back in the game, this time working from home and taking some of that heavy grounding and discipline and hard-business approach of bigger companies and applying it practically to smaller organisations who can learn from my experience and with whom I implement some great solutions.

I am fortunate that my passion for me is also translating into a career change that allows me to use my authentic voice in business and still keep a work/life balance that includes a daily dose of glitter.