We have roadworks this week, my little boy has been very impressed with how deep the hole is that has been dug in the main road out of the village. There have been traffic jams outside the house, too, and the school run has meant dodging angry drivers who have just got through the traffic lights and, although still in a 30 zone, feel justified in putting their foot down and zooming carelessly through areas where mums, bikes, dogs and scooters are just trying to get children to and from school without incident. 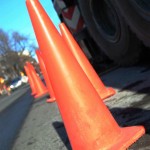 An startling number of these people are also holding their mobile phone and talking, and if some recent research is to be believed, they may have been checking Facebook and Twitter too.

In the UK it’s been illegal to use a hand-held mobile phone while driving since December 2003, with penalties ranging from £60 + 3 penalty points to two years in jail. Although there are exceptions for emergency calls, it is still an offence to make calls during on-the-road stops, for example, at traffic lights or in traffic jams.

When I worked for a couple of the big Telcos in the UK, most managers were given a mobile phone for work use and an in-car kit to make the most of those longer commutes. We were also warned that using a hand-held phone was a sackable offence, and we listened.

When I read a story about people using social media while driving, I was amazed that people can be so thoughtless about the real world when they feel the need to ‘keep up’ with their online contacts to the exclusion of their own and others’ safety.

According to the research by confused.com, 27% of people asked admitted to checking Facebook while driving, although you are four times more likely to crash if using a phone at the wheel. Of the 2,000 drivers surveyed, over 75% knew it was wrong, but on average ‘had’ to check their phone every 15 minutes.

“Our research shows that although people are aware of the consequences involved, they struggle to tear themselves away from their mobile phones and social media. Using these devices while driving is incredible dangerous,” said Gareth Kloet, Head of Car Insurance at Confused.com.

It’s difficult in a world wher you are encouraged to multi-task to concentrate on one thing at a time – but driving is surely one of those things that benefits yourself and other users by minimising distraction. 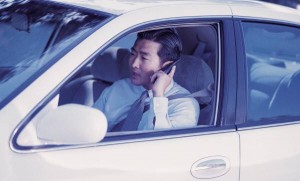 Dangerous distraction; talking, texting and tweeting on the move

The Financial Times ran a story yesterday that is hard to ignore in this context, about the Blackberry outage last week and the reported drop in road traffic accidents – A report in the National newspaper of Abu Dhabi says traffic accidents fell by 20 per cent in Dubai during the outage and by 40 per cent in Abu Dhabi – which the National claims has been “directly linked to the three-day disruption in BlackBerry services”.

Though other countries including the UK haven’t reported similar examples, there’s a warning flag hanging out that should be difficult to ignore. But the majority of drivers know it’s wrong yet continue to text, tweet, like and talk while in control of a fast-moving potential weapon – what else will it take to get them to stop? And do we really need to be that connected?

Do you tweet and drive? What would it take to make you stop? I’d love to hear your thoughts, please leave a comment below.